Commentary: It's what journalists do 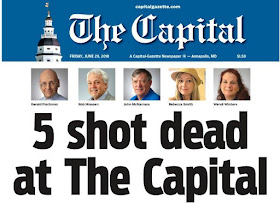 It's what journalists do.

We write things that someone, somewhere, probably won't like. It's been happening as long as the media has been around.

The deadly rampage today in the newsroom of the Annapolis Capital Gazette, allegedly by a man holding a longtime grudge because of a column written about him, is an extreme example of the former.

Danger is no stranger to our profession. We go to war zones. We uncover corruption. We go to dark places to interview shady sorts with nefarious motives to dig the nuggets of fact out of their often overlong and overblown stories.

We ignore the glares, the hate-filled comments about our work, those who crowd into our personal space and whisper threats. We turn down gifts, free dinners, special favors.

We try to be gentle with victims of tragedies, with children, with those naive to the ways of the world. But we get the story. It's what we do. We're not the counselors at the tragedy. We're the scribblers on the scene, getting that first draft of history.

Most of us aren't very well-paid. We're not in it for the money. We're in it because we can't imagine not being in it. It's a calling, not a profession.

We hold that torch high. We're not perfect and sometimes the torch slips. We take our lumps and vow to do better.

We're by no means the only ones who understand danger is part of the job. Police, firefighters, soldiers, corrections officers. All of us know what we're getting into.

The world doesn't have to like any of us. But the world needs all of us.

Gazette reporter Chase Cook said it best: "I can tell you this: We are putting out a damn paper tomorrow."

It's what journalists do.